ABOUT US
Information about divisions under Turlock Police Department, as well as our data and statistics.

PERMITS
Information on how to apply for bingo game permits, concealed weapons permits (CCW), dance hall permits, and other permits necessary to do business within the city of Turlock.

VEHICLE RELATED ISSUES / INFO
What to do if you've received a parking citation, your vehicle has been towed or impounded, if you are looking for a traffic report of an incident you were involved in, if your vehicle has been orange tagged, if you need to report a stolen vehicle, if you need help with vehicle VIN verification, or help with what to do after a vehicle accident.

SERVICES
How to get a copy of a police report, how to get a police clearance letter, Live Scan fingerprinting appointments, Offender Registration, and how to get our police volunteers (VIPS) to check your house while you're away on vacation.

GET INVOLVED
Whether you're interested a career in law enforcement, just want to volunteer your time, or are interested in the inner workings about how our department operates as an important function to ensure the success of our city, getting involved benefits not only you, but the police department and our community as well.

PERSONAL SAFETY
Information about our Rape Aggression Defense (RAD) classes, home safety tips, what to do about cyber bullying, information about Adult Protective Services (APS), and other important tips, classes, and information for your personal safety.

COMPLAINTS/COMMENDATIONS
Information about how to complain or commend a Turlock Police officer or employee.

We're hiring for Evidence & Property Specialist! 🚨 🚨 Closing: 4/23/21 The City of Turlock is accepting applications for a Police Evidence and Property Specialist I/II. The successful candidate will perform administrative and technical duties associated with the maintenance and control of police property, evidence, found property, supplies; and to protect the integrity of evidence throughout the judicial process. Link 👉 https://ci.turlock.ca.us/workingforus/jobopportunities/ #turlock #turlockjobs #turlockpolice #policejobs #evidence #turlockpd
Posted on Facebook 2 days ago

Posted on Facebook 2 days ago
This week we are celebrating National Public Safety Telecommunicators Week and Animal Control Appreciation Week. Interim Chief Steven Williams would like to take a moment to express his gratitude towards both of these units, whose staff are essential to the department and to our community of Turlock. #turlock #turlockpolice #turlockpd #telecommunicatorsappreciationweek #animalcontrolappreciationweek
Posted on Facebook 2 days ago

Congratulations to Officer Cherish Hood who has completed her training and is now solo! Officer Hood is 10-8! 😎👊🚔💯 #turlock #turlockpolice #turlockpd
Posted on Facebook 3 days ago
🐶 🐾 🐱 National Animal Control Officer Appreciation Week is celebrated every second full week of April. The week is designed to say thank you and to show appreciation to all the animal control officers who are dedicated to helping pets and people in the community every day. Animal control officers pick up stray animals and sometimes even DOA's (Dead on Arrival). There is more to their job. Officers seek justice in cases of abused, neglected and abandoned animals; they conduct humane investigations and bring in helpless animals. They protect animals from abusers and people from dangerous animals. Thank you to our Animal Control Officers, and to all Animal Control Officers everywhere! Be sure to say thank you to an Animal Control Officer this week! 👍 😊 @turlockanimalservices #turlock #turlockpolice #turlockpd #animalcontrolofficer #animalcontrolofficersppreciationweek
Posted on Facebook 4 days ago
Today marks the first day of the National Public Safety Telecommunicators Week! 💛 Most know about the blue and red lines that represent police and fire first responders, but some don't know about the gold line. The gold line lies between the blue and the red lines. The gold line represents Dispatchers that are never seen, but are always heard. TPD thanks all Public Safety Dispatchers who dedicate their lives to serving their communities. 💛 Be sure to thank a Dispatcher this week! 💛 #telecommunicatorsweek2021 #turlock #turlockpd #turlockpolice #thankadispatcher #dispatcherappreciationweek #dispatchers
Posted on Facebook 4 days ago

We're hiring for Evidence & Property Specialist! 🚨 🚨 Closing: 4/23/21 The City of Turlock is accepting applications for a Police Evidence and Property Specialist I/II. The successful candidate will perform administrative and technical duties associated with the maintenance and control of police property, evidence, found property, supplies; and to protect the integrity of evidence throughout the judicial process. Link 👉 https://ci.turlock.ca.us/workingforus/jobopportunities/ #turlock #turlockjobs #turlockpolice #policejobs #evidence #turlockpd
Posted on Facebook 5 days ago

PRESS RELEASE: UPDATE: HOMICIDE SUSPECT IN CUSTODY On August 4, 2020, at approximately 1:03 a.m., Turlock Police responded to a call of an aggravated assault in progress in the 500 block of Twentieth Century Boulevard. When officers arrived, they located Amythest Cortez, 27 years, of Gustine who was shot. Despite advanced medical care, Ms. Cortez and her unborn baby died. Turlock Police Detectives have been tirelessly working on this case since that night. A suspect was identified relatively early in the investigation as Robert Penaloza Jr., 29 years, of Turlock. It was learned he fled the area immediately and was believed to be in Mexico. An arrest warrant was issued for Penaloza on January 19, 2021. Turlock Police Department worked with investigators from the California Department of Corrections and Rehabilitation as well as the U.S. Marshals Service to locate Penaloza. Through relentless investigation, Turlock Police Detectives identified a possible area in Tijuana, Mexico, they believed Penaloza was living. That information was given to Police in Mexico, who located Penaloza and arrested him. He was turned over to the U.S. Marshals and returned to the United States. He has since been booked in the Stanislaus County Jail on the charges of two counts of murder, shooting into an occupied vehicle and felon in possession of a firearm. The Turlock Police Department would like to express our sincere condolences to the family of Ms. Cortez. The Turlock Police Department is an active participant in the Crime Stoppers Program. Callers can leave an anonymous tip by calling Crime Stoppers at (209) 521-4636 and may be eligible for a cash reward. To receive more detailed, up-to-date information directly from the Turlock Police Department via e-mail or text message, register for "Nixle" alerts at www.Nixle.com or more directly at https://local.nixle.com/register/. Or, text your zip code to 888777 to receive text alerts only. For additional information, follow our social media pages on Facebook and Twitter. ### This information is being released by Turlock Police Department Sergeant Michael Parmley. Any media requests should contact: Sergeant Michael Parmley Office of Professional Standards Turlock Police Department Office phone - (209) 664-7345 Email € mparmley@turlock.ca.us
Posted on Facebook 7 days ago
Posted on Facebook 7 days ago
Posted on Facebook 7 days ago 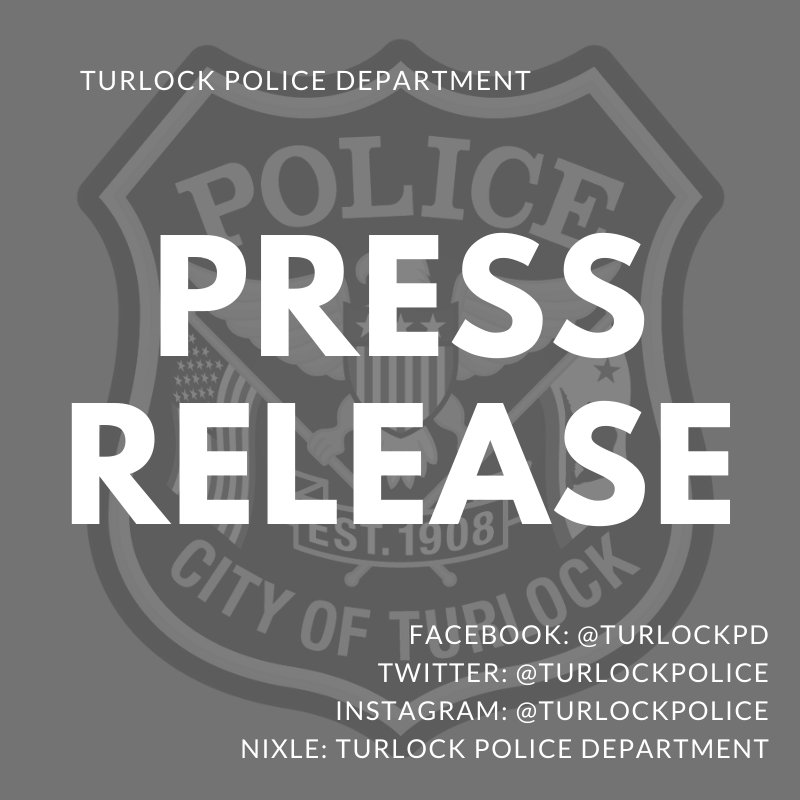